Two Northumbria University Knowledge Transfer Partnerships that focus on improving the lives of older people in the region have been recognised with national awards.

Jo Rose, project manager of the ambitious KTP with North Tyneside Council won the Business Leader of Tomorrow Award 2013 for her project that helps older people live independently in their own homes.

Meanwhile, the partnership between Northumbria, Age UK Newcastle and KTP Associate Laura Warwick, using Service Design to change the culture and service delivery of Age UK Newcastle, was chosen by the UK Research Councils to receive the RCUK Knowledge Base Impact Award.

The hotly contested prizes were awarded at the annual Technology Strategy Board’s KTP Awards in London this week.

Jo’s award recognises her role in the success of the Quality Homes for Older People partnership with North Tyneside Council. Some of the innovations she has helped to shape include; the delivery of a relocation strategy for over 1,000 older people in the area, and the securing of funding for a pilot project which will address the emotional factors facing older people when moving home.

Jo has worked across various agencies to develop a scheme that enables more people to be treated for minor illnesses and injuries inside their own home. The pilot project has helped reduce ambulance journeys, unplanned hospital admissions and shortened length of stay in hospital, saving over £11,000 within two months of being launched. North Tyneside Council now plans to roll out the programme to cover the entire North Tyneside area. 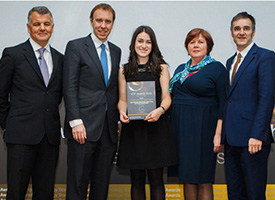 The Age UK Newcastle partnership was awarded for implementing design principles to place the end user at the heart of service delivery. During the three year project Laura’s input has helped to position Age UK Newcastle as a leader in terms of innovation among its peer organisations within the national Age UK federation. Service Design learning is now an integral part of the federation’s eight key strategies, guiding all 330 partner organisations.

The innovations developed through the KTP project have seen Age UK Newcastle double its share of the ‘care at home’ market and implement a new Telephone Neighbourhood Service for older people.

Throughout the partnerships, associates are supported by Northumbria academics. Laura has been supervised by Matthew Lievesley, Reader in Human Centred Problem Solving, and Mark Bailey from the Department of Design. Jo is working with Dr Emma Barron and Dr Glenda Cook at Northumbria University to help inform the KTP with North Tyneside Council.

Both projects are part of the Technology Strategy Board’s Knowledge Transfer Partnership programme which transfers academic knowledge into a business organisation through a knowledge transfer associate supervised by the University.

Lucy Winskell, Pro Vice-Chancellor for Business and Engagement at Northumbria University, said: “Partnership working plays a key role in Northumbria’s continued success. Knowledge Transfer Partnerships are viewed by many as ‘best kept secrets’ as they are one of the most effective forms of knowledge exchange and innovation that yield results on a company’s bottom line, yet not many organisations are aware of them. “To see this work being rolled out across the region and the UK is something that we can all be incredibly proud of.”

Each year the KTP Awards honour the best KTPs in the UK.

Skills and Enterprise Minister Matthew Hancock who attended the KTP Awards 2013 said: “Knowledge Transfer Partnerships play a vital role in driving the UK’s economic growth. They build strong partnerships between businesses of all sizes and universities, making sure that our expert skills base can reach its full potential.

“The UK is home to some of the most innovative minds in the world, and these awards showcase the talent that is helping us to keep ahead in the global race."

Iain Gray, Chief Executive of the Technology Strategy Board, said: “Once again we have been inundated with entries for the KTP Awards 2013, which really do showcase the outstanding and innovative collaborations which have taken place right here in the UK.

“Having seen the excellent work of these KTPs, we felt it only right that they were confirmed as winners at this year’s Awards event. What’s more we hope to see many more excellent innovations developed by it in the near future.”

A Northumberland business has landed the largest contract in its history following a successful partnership project with Northumbria University which led to the creation of a new type of ink.