The 11-times Gold Medal winner also received an Honorary Doctorate in Civil Law during the colourful ceremony at Newcastle Cathedral. She becomes Northumbria’s fourth Chancellor after replacing former Metropolitan Police Commissioner Lord Stevens of Kirkwhelpington, who served the University with distinction for the past 10 years.

Tanni Grey-Thompson, who was born with spina bifida, has competed in five Paralympic Games and is acknowledged as one of the most gifted and courageous sportswomen of her generation. In addition to her outstanding Paralympic achievements, she won the London Wheelchair Marathon a total of six times between 1992 and 2002. Following retirement from athletics she has played a prominent role in public life, and was made ‘Dame’ Tanni Grey-Thompson DBE for her services to sport in 2005. In 2010 she was elevated to the House of Lords as a crossbench peer and takes an active part in debates, with particular focus on sport, disability, health, welfare and youth development.

Tanni Grey-Thompson said: “It’s a massive honour for me to be made Chancellor of the University, and to have such a wonderful inauguration. I think celebration and ceremony is something we do very well in the UK. However, for me it’s not just about today’s ceremony and the honorary degree – it’s about having an ongoing connection with the university – with its students and its staff. My dad used to always say to me, education gives you choices. When I was fifteen I thought he sounded really boring, until now when I realise he was absolutely right.

“Just being at university is an incredibly positive experience and I like being around positive people. When I came for my first meeting at the University I had a wander around campus and was immediately struck by how friendly and upbeat everybody was. I got a really positive vibe from the place and thought, yes, I want to be here. I’m also looking forward to getting to know the guys at the Students' Union. I think it’s important to experience different aspects of university life. Northumbria has a great reputation for elite sport; however I would like to encourage all students to be as active as they can be. Study and exercise is a very important combination.”

Professor Andrew Wathey, Vice-Chancellor and Chief Executive of Northumbria University, added: “It is ten years since we welcomed a new chancellor, so today’s ceremony is extremely important and an opportunity for all of us at Northumbria, and our partners, to celebrate the appointment of Tanni Grey-Thompson. Her record of achievements, in sporting and public life, is outstanding and I’m sure she will prove a true inspiration to our students and staff in the years ahead. Both personally, and on behalf of the University, I would like to say how much we are looking forward to working with her.” 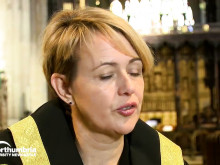 Cathedral welcome for Nor...