Two of Northumbria’s leading academics specialising in the care of older people have been invited to an event at the House of Lords to commend the work of nurses in this field.

Professor Amanda Clarke, Head of the Department of Healthcare, and the Reverend Dr Pauline Pearson, Professor of Nursing, were invited to Health Education England’s event which highlighted their activities to promote and recognise the work of nurses caring for older people.

Professors Clarke and Pearson have long been involved in Health Education England’s work around the nursing care of older people and have developed a national career framework for nurses caring for older people with complex needs in the North East. Nurses working in this field often need to care for patients who have multiple conditions requiring different types of care. The framework is now being piloted on a national basis.

The event was hosted by Baroness Greengross OBE, the former Director General of Age Concern, is now a crossbench member of the House of Lords chairing All-Party Parliamentary Groups in areas including intergenerational futures, continence care, dementia and ageing.

Professor Pearson said: “The invitation arrived out of the blue, but we were pleased to be part of this key opportunity to celebrate a range of national initiatives focused on providing better nursing care for older people, particularly those with complex needs.

“The invitation meant that we were able to put our pilot firmly on the national map. Professor Bayliss-Pratt highlighted our work in her speech and was very positive about the value of undertaking a pilot to facilitate more effective roll-out in the long term.

“We were able to meet with expert colleagues involved in the initiation and support of the overall programme of work. We also talked with staff and clinicians participating in the Kings College Older Peoples Nursing Fellowships scheme, which complements the work we have done to develop a framework for the more mainstream nursing workforce.”

Northumbria is in the top quartile in the UK for its research power in Allied Health Professions and Nursing. In the most recent Research Excellence Framework, more than 80% of the University’s research in this area was rated as world leading or internationally excellent. 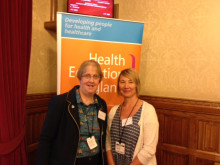