More than 30 presentations by leading international figures took place, covering the breadth and depth of contemporary policing research. This included topical issues such as chief police officer’s perspectives on power, the use of technology and data in policing, street policing and mental health.

Professor Mike Rowe, from the Department of Social Sciences at Northumbria, co-organised the conference and said it offered important insights into current policing challenges: “Ethnographic accounts of policing provide crucial understanding of how officers and the public understand the role of police and respond to new initiatives and ways of working.

“Capturing these subjective accounts is vital if we are to ensure effective and legitimate innovation.”

The keynote speakers at the conference were Dr Merlijn van Hulst, from Tilburg Institute of Governance whose presented was titled ‘An Ethnography of Narrative in Policing’ and Dr Anna Souhami, University of Edinburgh Law School, who explored the topic of ‘understanding narratives of policing in the remote Northern islands of Scotland’.

The conference was convened in association with the College of Policing, the lead professional body for policing in England and Wales, helping to further academic and practitioner partnerships. Dr Paul Quinton from the College outlined the importance of ethnographic approaches to police work since: “Ethnography has a vital role to play in evidence-based policing, by exploring how policing is practised, experienced and understood on the ground.”

The conference explored the role and status of narrative in policing itself and in ethnographic police research writings. Storytelling is a central device within police occupational culture and organisational identity, and fictional and non-fictional representations of police work shape public and practitioner understandings of policing in ways that tend to prioritise action-oriented law enforcement over other aspects of policing.

Co-organiser Dr Megan O’Neill from Dundee University added: “Conferences such as this are vitally important to furthering world-class scholarship in policing research. Ethnography is an exciting and dynamic method, the significance of which is often only fully realised through discussion and debate with others, both in the academy and in policing.”

Assessed as world-leading and internationally-excellent, Northumbria’s research to develop the evidence base for contemporary policing takes place across the University. Northumbria’s work in this area is characterised as:

Northumbria also delivers regular training and events throughout the year, including the Police Research and Education Network Seminar Series. For upcoming seminar and events click here.

For more information about Northumbria’s Police Education and Research Network go to: https://www.northumbria.ac.uk/business-services/engage-with-us/police-research-and-education-network/ 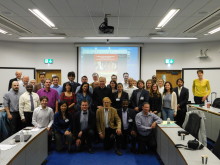