What was your initial reaction to the US Election result?

Truthfully, I was devastated. I had an inkling beforehand about a possible Donald Trump win. The earliest exit polls showed Trump at 55% in FL at around 10:30 UK time.

I am most worried about what the next four years will look like, how a President Trump will govern, the regressive policies that will undoubtedly come from his presidency, a GOP controlled Congress, and likely three new appointments on the Supreme Court. One way to think of that is: There go the checks and balances.

The world community will be riled by this. The markets are already showing signs of turmoil. A New York Times headline put it bluntly: “World Markets’ Plunge Signals Investors’ Doubts About Trump.” The Mexican Peso went down 12% against the dollar. It all sounds like late June 2016 and the post-Brexit trouble.

Why did most analysts get it wrong?

It may be somewhat like Brexit. Those polls were off. But ‘remain’ voters took false comfort in data that predicted a victory for ‘remain’.

The New York Times’ upshot had Hillary Clinton on an 85% chance of victory. The Huffington Post put Clinton at 98.3%, while Nate Silver’s FiveThirtyEight website had Clinton at a more moderate 66.9%

The Democrats and the pundit class underestimated Trump’s appeal. He tapped into the hopes and fears of the white working classes and they showed up in droves on voting day. Something else could have been going on here. These GOP voters might have been ashamed of telling pollsters that they were going to pull the lever for Trump. That could have given us a very skewed figure.

We also cannot forget how reviled Hillary Clinton is by conservative whites. This goes back to the 1990s when she was a politically active First Lady, spearheading health care reform. She is a very unpopular figure. The media maybe underestimated just how reviled she was and is. We all have heard the chants of ‘Lock Her Up!’ or ‘Trump that Bitch!’ echoing in arenas at Trump’s campaign stops

Where did it go wrong for Clinton?

Clinton based quite a bit of her decisions for final campaign stops on the polling data that her camp was regularly receiving. Perhaps she should have spent time in Wisconsin, which , as of now, shows Trump at 48% and Clinton at 47%; Utah, where Trump has 50% to Clinton’s 46%; or Florida, with Trump at 49% and Clinton at 48%. Ohio was a blowout.

A piece in the The Guardian simply claims that Hillary lost because of, “the economy, trust and a weak message.”

FBI director James Comey’s press release about the other emails that the agency was going through did not help. In fact, it was a bombshell that was just 11 days before the election. The FBI gaslighted Hillary.

What will be the impact on the UK and Europe?

If there is a severe economic downturn in the US, it could deeply alter other world markets. The pound is already at a very low state, hovering around 1.25 against the dollar. Will the fallout of Trump’s elections create greater economic instability? I think so.

Trump has also variously praised Vladimir Putin, Kim Jong-un, and even Saddam Hussein for their abilities to control populations and exercise strength and power. In a dispute between Russia and a European nation, how would a president Trump weigh in? Trump repeatedly criticized NATO on the campaign trail and has even talked about pulling the US from the international security alliance. Trump says it is “obsolete” and “costing us a fortune.”

What about the North East of England in particular?

Any potential American economic fallout would surely have an impact on this area, even if it was minor. A great example of this would be the economic horrors of the 2008 great recession that wreaked much havoc on America and brought the world economy down with it. It probably would not help if Trump embroils America in a trade war with China. But Trump’s new mercantilist, protectionist on trade may make that a possibility.

Trump has made a kind of security fetish of America’s borders. Perhaps under his presidency the Department of Homeland Security would be charged to tighten America’s borders and to further restrict travel and work in the US. Here’s a candidate who made building a wall on the Mexican border the central feature of his campaign.

Those in the North East who care about human rights and what happened in Iraq and Afghanistan should be worried when the next leader of the free world has publicly said that he would bring back waterboarding and other forms of torture. He also said that the families of terrorists should be killed.

Surely, there is a clown elephant in the room. Trump’s presidency will likely diminish the reputation of the US all over the world and in the eyes of people living in Newcastle as well.

Could this force Theresa May into a ‘hard’ Brexit?

Perhaps. But maybe there would be an equal argument for a ‘soft’ Brexit. Access to a single market and open borders might look much better, if the US suffers a major economic hit or adopts an extreme protectionist line.

What will happen to the ‘Special Relationship’? Will an ‘isolationist’ United States lead to an equally isolated UK?

I think that we are already seeing the little England bitter fruits of Brexit. Now the US will surely follow that lead. Trump’s policies, if we can pretend that they are real and consistent ones, are built on a kind of we-win-or-we-lose approach. His black and white world is divided into winners and losers. That’s why he casts doubt on the UN and NATO as well.

The recent Opinium/Observer poll in the UK found “Widespread dislike for Trump among the British public . . . reflected by the words most commonly associated with the candidate. Dangerous (71%) was the most common word, followed by hate (61%) and fear (60%).” It is hard to see how the UK will cozy up with Trump.

Jeremy Corbyn said: “Many in Britain would be “understandably shocked by Donald Trump’s victory in the US presidential election, the rhetoric around, it and what the election result means for the rest of the world, as well as America.”

What will be the impact on Higher Education – both for institutions in the UK and also for international students and academics?

I’m not sure there would be much of an impact on American students who want to study in the UK. Trump has, in passing, spoken about college student debt relief.

As far as Higher Education in the states goes, we can see what is already happening and will happen in the UK post-Brexit i.e. diminished funds for research, a government that is bent on curbing union power, etc. In the US there may already be a model for how a conservative executive will respond to HE. Far-right Republican governors in Wisconsin, Kansas, and North Carolina are defunding higher education in those states and even putting tenure under new scrutiny and stress.

What historical ‘shock results’ does this compare to?

Certainly to Brexit. But also to the 2000 election of George W. Bush, with a nation deeply divided back then as well. There is some cultural and political upheaval that is reminiscent of the 1960s. We aren’t having the same violence and assassinations of leaders as in 1963 or 1968. Yet groups like BLM are fighting a clearly unjust and brutal police force and justice system.

I even wonder if this is a kind of 9-11 moment, without the death and devastation, of course. But the extreme uncertainty and anxiety is here. This seems like a new reality for us. It will probably be a dividing line, especially after eight years of President Obama. Who will fill Trump’s cabinet? What will his first 100 days look like?

In the wake of Brexit, what does a Trump victory say about trends in global politics (in your opinion)? What has caused the noticeable shift to the right? Does it echo any key moments in history?

Clearly the neoliberal experiments of New Labor and Clinton Democrats have not gone over well. Sure, the unemployment rate in the US right now is 4.9%. But millions of poor whites, without college education, feel that they have been deliberately left behind to suffer while Democratic and Republican party leaders look to other constituents. Both in the UK and in the US we’re seeing a revolt against the experts, a revolt against the establishment media, and a preference for a bully/strongman politician who says or tweets anything he wants to, no matter how vile or hateful it is.

I think it echoes the west in the 1930s, too. The economic crises along with political ones meant that more and more voters sought drastic solutions and turned to disreputable and authoritarian leaders.

Why is now the perfect time to pursue an interest in a degree in American Studies or History at Northumbria?

The kinds of political, racial, and cultural questions that the 2016 campaign and election coughed up will need young scholars to think long and hard about what America means. That includes: what the US means to itself and to the rest of the world. Our students have fun learning and writing about what makes America the kind of country it is. They enjoy exploring that by looking at politics, race, pop culture, the media, and much more. Many of them also spend a year or a semester at a sister university in the US.

Why choose Northumbria if you’re interested in studying the US?

That’s an easy one. We have one of the strongest concentrations of US historians, literary studies and film studies scholars, and others who work on topics related the US. We offer a wide range of modules on US topics and one in particular, Your Graduate Future, helps them prepare professionally for life beyond our campus. 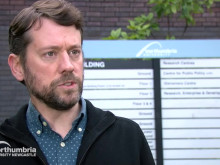