If there’s one thing that financial markets don’t like it’s uncertainty. Though Donald Trump signifies uncertainty to many, to the markets he’s a relatively safe entity. Hence, despite an initial fall that followed his surprise election, they have since rallied.

Early indications of Trump’s victory were worrying. During the count, when it was becoming clear that he was on course to win, the Asian markets did tumble. Also the majority of the European and the American futures markets suggested the big falls were going to continue. But Donald Trump’s first speech as president-elect, in which he seemed more statesman-like and reached out for co-operation and unity, stopped that happening.

Focus on the economics

Many have questioned Donald Trump’s character, but market participants appear to have divorced their emotions from the negative sentiment surrounding his more radical policies and have focused on the economics.

Certainly, in the short-term, history has shown that America’s S&P500 Index tends to rally for on average four to six quarters following a presidential election, then levels or corrects.

Equities have rallied with commodities after the initial shock of Donald Trump’s election victory gave way to optimism that his plans for fiscal stimulus, lowering taxes and an increase in public spending, will provide a boost to the US and then the global economy. For example, investment banking giant Goldman Sachs is sticking with its forecast that the US economy will expand by 2% next year, though it acknowledges the election result increases “policy uncertainty”.

Furthermore, Trump has said he plans to spend on a range of infrastructure projects, with a focus on growth within the US manufacturing and commodities sector, which traditionally helps drive the US economy. The ten-year US Treasury yield soared following the vote, as Trump’s spending pledges sent this gauge of inflation expectations to its highest point since July 2015. This also confirms the market expectations of higher interest rates under a Trump administration than a Clinton one. Potential higher interest rates in the US compared to other major countries could help the US dollar keep its value in the longer-term.

The Republican Party control of both Congress and the Senate, and the ability to for Trump to select a Supreme Court judge, is also an important positive for markets. It means the president will have fewer hurdles to getting policies into law, and therefore there will be less uncertainty. Given Trump’s record and character, he is seen as a businessman who is not afraid to speak openly – and is someone who will get things done.

Having said that, Trump is an unconventional character and caution is required. If he goes ahead and pushes quickly to implement trade tariffs (for example, he has spoken of imposing a 35% and 45% tariff on Mexican and Chinese imports, respectively) this would destabilise the markets and could cause stagflation in the US. Also there are question marks hanging over his spending plans given the US has such a large deficit.

Brexit offers a useful comparison. The UK’s main index, the FTSE 100, has done well since the Brexit vote due to the weak pound helping international companies and exports that make up the index. But there is still a large amount of uncertainty and less optimism. The pound is the best proxy for this, with the largest falls against the dollar taking place following the Brexit vote and market fears of a hard Brexit.

The market outlook in the UK is more uncertain by the day. When the process of negotiating to leave the EU starts the markets will probably be kept in the dark. This uncertainty could lead to more volatility.

Plus, if the weak pound continues this will hurt the UK economy. Britain is already starting to see this: imports and commodities are more expensive, which is pushing up prices, therefore increasing inflation. When investors get nervous about the state of an economy, they look to minimise their exposure, which can lead to a sell-off of stocks. If others follow suit, this could cause further volatility.

The financial markets may have not expected either Brexit or Trump, causing short-term uncertainty. But, with Trump, there seems greater clarity from the markets about what he may do and they can therefore act accordingly. As for Brexit, long-term uncertainty will continue. 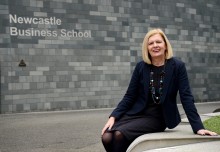 Northumbria University lecturer Susan Bickerton has been named a Companion of the Chartered Management Institute (CMI).