Bernie Sanders, the independent Vermont senator who ran Hillary Clinton ragged in the fight for the Democratic presidential nomination, has finally endorsed his rival.

Thanking the millions of Americans who voted for him in the primaries, he once again sounded his rallying cry: “We have begun a political revolution to transform America, and that revolution continues. Together, we will continue to fight for a government that represents all of us, and not just the 1%!”

A month after the primaries ended and Clinton won enough delegates to seize the nomination, the Democratic Party can breathe a sigh of relief and begin the healing process after a tumultuous year, one that saw a relatively obscure political renegade steal the hearts and minds of millions – and nearly upend America’s oldest party.

Sanders announced his candidacy for president almost exactly a year ago, calling for Americans to rethink economic inequality and social welfare. He represented the Democratic Party’s progressive wing, which wished President Obama had gone further with his healthcare reforms, or had not been so eager to authorise invasive drone assassinations.

Positioning himself as an anti-establishment candidate who didn’t take donations from billionaires or use a “Super PAC” (a highly controversial type of campaign organisation), Sanders set up a sharp contrast with Clinton, who continues to argue that wider fundraising means are justified if the Republicans are to be beaten.

The list of Clinton’s top donors this cycle includes multinational companies, hedge fund billionaires, private equity firms, and media conglomerates. And yet, despite his reluctance to take money from Wall Street fat-cats and corporations, Sanders raised more money than Clinton – primarily through thousands of small donations from individuals. The #FeeltheBern slogan caught on long before the first primaries, and the grassroots enthusiasm for Sanders drew huge crowds to his rallies. Here, it seemed, was a genuine alternative to Clinton.

More than once, it seemed that the momentum could be shifting in his favour: when Clinton squeaked by him in Iowa by less than 1% (or as some would claim, coin tosses), when he routed her by more than 20 points in New Hampshire, and then when he nearly embarrassed her in the March primaries across the north-east and Midwest, losing Illinois and Missouri by very narrow margins.

But the Clinton campaign quickly righted the ship, racking up devastating wins in southern states with massive turnout from African American voters. In the end, while the Vermont senator won 22 states, Sanders fell millions behind in the overall popular vote and delegate count, unlike Barack Obama, who only very narrowly beat her in the 2008 nomination contest. Sanders also failed to attract the support of the party’s super-delegates, who could theoretically have handed him the nomination even if he lost to Clinton on all other measures.

Near the end, Sanders attacked Clinton with increasing vitriol, questioning her credentials, engaging her contemptuously at the later debates, and even accusing her supporters of “purging” voter rolls in Brooklyn. This predictably upset many Democrats, who worried he would damage Clinton ahead of the general election. But the notion that Sanders has irretrievably hurt her is unfounded.

The Democratic nomination has been a relatively sedate pas de deux in comparison to the bloodbath on the Republican side, and, the fact is, the Democratic Party is far more resilient than the other side. Eight years ago a truly ugly nomination contest between Clinton and Obama ended amicably. After the delegates were seated, the Democrats made a concerted and effective push to unite behind Obama – and Clinton was front and centre.

Donald Trump has urged Sanders to run as an independent candidatebecause he has been “treated terribly” by his party. But Sanders has not been treated especially poorly, and it’s hard to see why he would bolt when dividing the Democrats would all but assure Trump of victory.

What Trump also misunderstands is that, unlike his devastating campaign, Sanders’s run was a far more traditional effort. Presidential contenders from the far left or right of their parties have always campaigned to widen the political spectrum: in 2004, representative Dennis Kucinich and veteran civil rights activist Al Sharpton attempted to drag the Democratic Party leftward, while billionaire Steve Forbes and Gary Bauer, a former undersecretary of education, pulled the Republican centre rightward in 2000.

Theirs are not necessarily household names, but their influence mattered. George W Bush doubled down on his pro-life rhetoric and ratcheted up his promises for tax breaks in reaction; Sharpton and Kucinich forced John Kerry to pay greater attention to social justice and the anti-war groups among Democrats.

Sanders has accomplished something similar, forcing a centrist frontrunner to adopt elements of a progressive platform. He has left an indelible mark on the Democratic Party, and he has changed the political narrative. He also lasted far longer and garnered millions more votes than most insurgent candidates. These should be counted as major successes, and they are tributes to his skill and determination as a campaigner as well as to his message.

Whether Sanders really has instigated a political revolution, as his official campaign slogan promised, is up for debate. But I reckon that if Clinton reflects properly on how radical Bernie was, if she thinks carefully about how much he transformed her campaign, she could only conclude that the revolution was real and cannot be ignored. 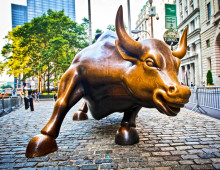