Taking place at the prestigious Isaac Newton Institute (INI) for Mathematical Sciences in Cambridge, the programme sits at the forefront of research in nonlinear sciences. It will bring together experts in the mathematics and physics of nonlinear waves across a variety of fields, from water waves to nonlinear optics and condensed matter physics.

Together they will carry out research on the theme of dispersive hydrodynamics– a relatively new field of mathematics which has increasing importance for real-world applications. Examples include understanding the mechanism behind the formation and development of rogue waves and tsunamis in the ocean, and devising new methods for transmitting information through optical fibres.

The programme, entitled Dispersive Hydrodynamics: mathematics, simulation and experiments with applications in nonlinear waves, is being organised by Professor Gennady El and Dr Antonio Moro, of Northumbria University’s Department of Mathematics, Physics and Electrical Engineering.

Professor El, a key figure in the field of nonlinear waves, said: “Dispersive hydrodynamics, the overarching theme of the programme, has recently emerged as a unified mathematical framework for the description of complex nonlinear phenomena. The forthcoming INI programme is the first event of this scale entirely dedicated to this new discipline, which is a recognition of its significance and importance. I am particularly pleased that the cutting-edge research conducted by the Mathematics of Complex and Nonlinear Phenomena research group at Northumbria will get strong representation in the programme, thanks to the involvement of several members of the group as programme participants and workshop organisers”.

Dr Moro who organised the very first conference on the theme back in 2012 added: “Being awarded this six-month programme at the Isaac Newton Institute, which is a world leading international visitor research institute, is a great honour. This is a very exciting time for dispersive hydrodynamics!”

The INI was established to run research programmes based on mathematical themes which can be applied to a wide range of science and technology. Proposals for programmes are considered by INI’s Scientific Steering Committee and awarded on a competitive basis through an anonymous peer reviewing process.

The Northumbria programme was selected because it identified major challenges that will shape future directions and developments in the field of dispersive hydrodynamics. According to one of the reviewers involved in the selection, the programme will have a “lasting impact in Mathematics and related fields”.

Over the six months of the programme there will be at least 30 mathematicians based at the INI at any one time. As well as five major workshops, there will also be seminars, round table discussions, small group activities and informal interactions which aim to create an environment in which people can develop and try new ideas.

Professor El further explained: “We want to give people the time and the freedom to interact and exchange ideas in the best possible environment. There will be a particular emphasis on bringing together researchers from different areas to explore new connections and ways of enhancing the impact of the dispersive hydrodynamics research on science and technology”.

It is hoped at the end of the programme, new cross-disciplinary interaction will have taken place between researchers, leading to new findings and opportunities for further research.

Two Rothschild Fellowships are associated with the programme, with the organisers nominating two prominent academics who will give a public lecture and spend a month at the INI as part of the event. The programme will also include the special event, “Women in Dispersive Equations”, which will highlight outstanding scientific contributions of female researchers to the field.

Find out more about Northumbria University’s Department of Mathematics, Physics and Electrical Engineering and Mathematics of Complex and Nonlinear Phenomena research group.

Research on Dispersive Hydrodynamics at Northumbria is conducted within Northumbria’s Extreme Environments Multidisciplinary Research Theme. It is supported by UK research funding bodies including the Engineering and Physical Sciences Research Council, The Leverhulme Trust, The Royal Society, The London Mathematical Society, the Defence Science and Technology Laboratory, and the Institute of Mathematics and its Applications. 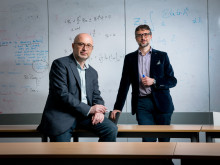 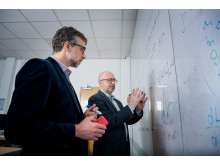