Have you ever looked into a mirror and wondered what happened to your fourteen year-old self?

A new device developed by design researchers at Northumbria University and the University of Dundee is helping people get back in touch with their teenage selves by capturing their looks and playing music from their estimated adolescence.

Developed as a research prototype using online artificial intelligence to guess your age and play music from when it estimates you were 14 years-old, the SelfReflector went on display at the V&A’s Digital Design Weekend at the London Design Festival. As well as helping you remember your youth, the mirror also comments on how high street shops are using increasingly sophisticated CCTV to analyse the feelings and behaviour of shoppers.

Dr Jayne Wallace, Reader in Craft Futures at Northumbria’s School of Design, said: “In our research we were interested in all of the ways that people use the high street beyond somewhere to buy things.

“It’s a place where we find out who we are as we grow up and then beyond into adulthood; experimenting with how we see ourselves through trying on new clothes, developing our identities among trusted friends and imagining ourselves in relation to the ‘lives’ suggested by the variety of goods on sale.”

She added: “Mirrors are strange and often difficult objects to encounter – especially in public places – and the awkwardness of trying on new glasses in a shop can be daunting and embarrassing. SelfReflector was envisaged to mould itself around the person looking into the mirror – playing music from when they were a teenager and hopefully creating a comfortable and playful space.”

First released and developed in partnership with the eclectic Dundee optical boutique, Spex Pistols, the mirror has already captured international attention, most notably from design fans traveling as far afield as the Americas and Europe during the Dundee Design Festival in May. The SelfReflector is a response to how positive human behaviours can be placed at the heart of interactions with technology and could be used to open up new possibilities for businesses to form relationships with their customers.

Professor Jon Rogers, Chair in Creative Technology at the University of Dundee, said: “For centuries we have looked back at ourselves through mirrors. We all have a special relationship through the magic of the ‘looking glass’ and through SelfReflector we wanted to explore what this meant to people. 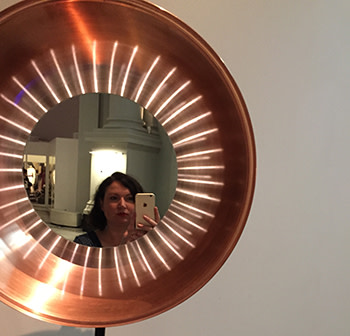 “We wanted to reflect on what happens when technology comes into our lives. The pictures the SelfReflector takes are processed to estimate the viewer’s age, facial expression and mood. The knowledge transfer which began in a small shop in Dundee could change the way customers interact with the high street.”

The mirror was designed by Jon Rogers, Mike Shorter and Pete Thomas from the University of Dundee alongside Jayne Wallace from Northumbria and input from Richard Cook at Spex Pistols as part of a research programme investigating the role of the Internet of Things on the high street.

It was funded by the Engineering and Physical Sciences Research Council as part of the Connected High Street Project http://www.theconnectedhighstreet.co.uk.

Northumbria offers a range of Design courses at its internationally-renowned and award-winning School of Design. To find out more about studying at Northumbria sign up for one of our upcoming Open Days on 29 October and 26 November by clicking here.

Rethinking the future: the importance of responsible innovation

Northumbria University’s Salon initiative was just one of the innovative projects discussed at a recent panel debate exploring the future of design.

​How would you like a kitchen surface that cleans itself? Technological advances such as this could be one step closer after a breakthrough by Northumbria University and Nottingham Trent University. 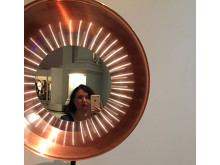