A partnership where medical students from across the world study the first year of their medical degree in the UK is celebrating its 10th anniversary.

Students from 140 different countries, including Canada, the USA and Kenya are amongst some of those enrolled on a four-year medical degree at St George’s University, Grenada who undertake their first year at Northumbria University, Newcastle in the partnership - the only one of its type in the UK.

Over the ten years Northumbria University has helped to educate and train more than 1,800 medical students as part of the Keith B Taylor Global Scholar’s Programme; named after the former Vice Chancellor of St George’s University.

Professor Dianne Ford, Pro Vice-Chancellor for Health and Life Sciences at Northumbria University said: “The partnership with St George’s University demonstrates the truly global reach and reputation Northumbria University has as an outstanding university. We are delighted to welcome the latest students and to celebrate the 10thanniversary of the partnership. The feedback from the students and St George’s is incredibly positive about their learning here, and demonstrates our commitment to academic excellence. We look forward to continuing the successful partnership.”

Professor Cal Macpherson, Vice-Provost of St George’s University, said: “We are incredibly proud of our partnership with Northumbria University. Our students benefit greatly from their studies in Newcastle. We know our medical students go onto successful residencies and careers right across the world having experienced world class teaching and learning at Northumbria.”

The degree programme at Northumbria covers the basic sciences fundamental to medicine and there are opportunities for shadowing physicians at some local NHS hospitals. It also includes contributions from local and national physicians.

The partnership involves two intakes of medical students a year from St George’s University – in January and August.

During their time at Northumbria the students have also raised several thousand pounds for various charities, including Marie Curie Cancer Care, Changing Lives, the North of England Children’s Cancer Research Foundation and Children with Cancer in Malawi. They have also participated in sporting opportunities with students having represented Team Northumbria in cup and league winning teams in the British University’s sports championships in lacrosse, men’s and women’s water polo, women’s volley ball and women’s football.

Mark Piliguian, 29, from Ontario, Canada is one of the latest medical students to study at Northumbria. He said: “I wanted a new experience and to explore the world beyond my hometown and coming to Northumbria seemed a great opportunity for me to do this. England, Newcastle and the University seem really culturally diverse and as I’m interested in paediatrics, it’s important for me to learn about the steps required to practice medicine on a global scale.”

Isabella Graham also from Ontario, Canada has also recently started her first year at Northumbria. She said: “Northumbria represented the first step in my career in global medicine This has given me the opportunity to not only live in the city of Newcastle but to explore other parts of Europe and Africa whilst I am here. Northumbria University has an excellent reputation and while I’ve only been here a week I can tell is going to be a fantastic 12 months.”

In 2009 Newcastle Hospitals NHS Foundation Trust identified the need to develop a new kind of medical professional to support medical staffing of intensive care units in response to variations in recruitment, retention patterns of medical staff and working time regulations. 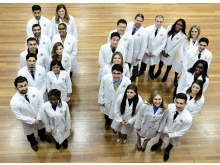