The 21-year-old from Coleraine, in Northern Ireland, has managed to balance playing for Sunderland AFC Ladies alongside her studies on the University’s BSc Sport Science with Coaching course.

The multi-talented athlete, who has been captain of Sunderland’s development team for the past two years, also plays for her country’s national volleyball team. She hopes to continue her studies at Northumbria, working towards a master’s degree in Exercise Science.

Alice identified a gap in monitoring performance among the under 17 girls at Sunderland AFC Ladies and using what she had learned as part of her degree, decided to create and take on the role of performance analyst for the young female footballers.

She also works for the Newcastle United Foundation; a charitable arm of the Premier League football club that helps disadvantaged young people and families across the region.

After the recent World Cup success of England’s women’s team, Alice is hoping to pursue her passion for the beautiful game even further after pushing Sunderland AFC’s first team this season.

“I’ve settled in the North East,” she said. “I’ve got my football and it’s a high standard here. I certainly like the idea of playing on after university but I’m aware that in women’s football you often need a good education in reserve.

“When I first came to Northumbria I wasn’t sure what I wanted to do after graduating. The University has taught me a lot both academically, sporting and career wise. I’ve had volunteering experience, captained sports teams and been given fantastic placement opportunities. I’m very blessed to be at this University with its fantastic facilities and hugely supportive staff.”

Angela Hibbs, a lecturer in Sports Biomechanics and Performance Analysis at Northumbria University, said: “Alice has shown enormous commitment to both her sport participation and university studies over the past three years.

“She graduates with an excellent first class degree and she does this alongside having volunteered for many different projects over those three years in performance analysis and coaching within the University.

“She has also managed to balance having a successful input into the raise of Sunderland Ladies AFC recently. This has taken great organisation, commitment, motivation and self-drive. Alice has a superb CV and university degree to forge ahead and pursue a career in sport science – which I have absolutely no doubt she will – in what is a hugely competitive job market.”

Football referees cope by thinking they are better than other refs 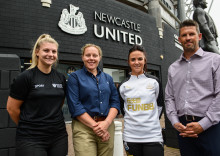