Northumbria opened its annual degree show with a stunning launch event across campus. REVEAL featured the creative work of talented graduating students from the University’s Architecture, Arts, Design and Media course. Northumbria’s global reputation for academic excellence, research and innovation could be seen first-hand in the exceptional work on display at REVEAL, with many of the award-winning students going on to exhibit at high-profile shows in London throughout July.

The exhibition took place at Northumbria’s city campus in the heart of Newcastle and showcased student work to an audience of creative professionals, industry experts, VIPs and the public. In the Architecture studios, students such as Christine Mottershead unveiled their beautiful and thought-provoking drawings and designs, a product of the studio culture and authentic practice ideals which are core elements of the course. In the same studio space, work by Interior Architecture students demonstrated highly creative responses to the live projects set by course leaders and external clients as part of the degree, which explores innovative approaches to building reuse and adaptation. Alasdair Graham, a final year Interior Architecture student at Northumbria, whose project is featured below, said: “I have thoroughly enjoyed studying at Northumbria University, it has been without a doubt the best thing I have ever done. The interior architecture course is very well respected and has made a name for itself. Studying here has given me the best start to enter a career in architecture practice, which is my goal now that I have completed my studies.”

Kelly Mackinnon, principal lecturer of Architecture at Northumbria, said: “Northumbria Architecture Degree Show 2016 showcases the talent and dedication of this year’s graduating part 1 and part 2 architects and Interior Architecture. This year’s show was another visual delight evidencing the commitment to the highest standard and quality of architectural education. The show was packed out with an exciting mix of visitors; including Practitioners, alumni from the university and current students. We are extremely proud of the high levels of dedication, enthusiasm and support from both students and staff resulting in an outstanding show evidencing highest quality work and creativity.”

Fine Art students’ also showcased their distinctly individual style, demonstrating a high level of creativity to provoke debate and reflect the diversity of contemporary ideas and culture. Daisy Cockle, graduate student from the Fine Art at Northumbria, said: "Studying at Northumbria University has been inspiring, challenging and rewarding. I have had the opportunity to make some amazing connections in the Arts community in the North East. I would definitely recommend the Fine Art course to anyone who is looking to enter the world of art."

Professor Keith McIntyre, Head of Arts Department at Northumbria, said: “The annual Northumbria Fine Art Degree show at REVEAL has become one of the key platforms for showing the best emerging contemporary artists in the North of England.”

Callum, who won the Philips Internship Award, said: “I was thrilled to even be considered for the award, getting the opportunity to follow in the footsteps of the past prestigious winners is extremely exciting. The opportunities afforded through the RSA award and fellowship will be integral in going forward into my career after university. I’m very much looking forward to starting at Philips and discussing the potential of developing the concept further out in Eindhoven.”

Architecture, art, design and media students have unveiled their innovative work at this year’s REVEAL, a spectacular two-week exhibition across Northumbria’s campus.

Sixty years of fashion excellence at Northumbria University was celebrated in style at BALTIC Centre for Contemporary Art when students unveiled their catwalk collections at this year’s Graduate Fashion Show.

​Dresses inspired by Japanese armour, outfits taking you back to 1970s Brooklyn and the birth of hip-hop, and clothing made from repurposed photo-luminescent materials. These were just some of the innovative creations that graced the runway at Northumbria’s annual graduate fashion show last night at BALTIC Centre for Contemporary Art.

Northumbria artists reveal There Were Islands at BALTIC 39

​Eight graduating artists will tonight launch a stunning group exhibition built around the metaphor of a river estuary and its status as a site of shifting and concealed meanings.

​Media and Communication Design students from Northumbria won nine of the 29 ‘Ones to Watch’ awards at this year’s D&AD New Blood exhibition in London.

​Have you ever looked into a mirror and wondered what happened to your fourteen year-old self? 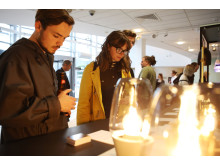 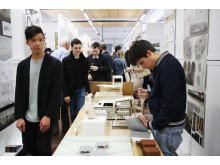