Through interviews with Irene’s friends and family, the documentary pieces together fragments of the past to uncover a long held secret about her life and her battle with mental illness.

Northumbria Senior Lecturer and award-winning animation director Ellie Land was asked to lead on the animation for the film, which will be screened at the Tyneside Cinema on Saturday 4 May.

Ellie worked with a team of graduates at Teesside University’s TUCan animation studio to produce the animated scenes used throughout the film to tell Irene’s story.

As Ellie explains: “Iain first contacted me about five years ago after seeing an animated film I had made called Centrefold and asked if I would be involved in Irene’s Ghost. Animation is integral to the film and he had a clear vision of the role it would play.

“Because much of the film was based on people’s memories of Irene, animation provided a way to portray these scenes in a sensitive and thought-provoking way, and to combine this with the filmed footage and interviews.

“Everyone involved in the film is very proud of the finished result and to see it being screened here in the North East will be a wonderful moment.”

Ellie has worked at Northumbria since 2009, combining her teaching with research in the field of animation and documentary. In recent years she has directed a number of animated films focusing on issues such as health, body confidence, and mental illness, working with organisation such as the National Institute for Health Research and the Wellcome Trust.

After being asked to direct the animation for Irene’s Ghost, Ellie teamed up with Siobhan Fenton, Associate Dean (Enterprise and Business Engagement) of Teesside University’s School of Computing and Digital Technologies. The two had previously worked together on Ellie’s 2012 film Centrefold and recruited a team to work on the animated scenes for Irene’s Ghost.

Ellie said: “We had a team of around eight people working on the animation for the film, both here in the North East but also in Australia and Sweden, so it was a real team effort and great to see the creativity on show.”

Students studying on Northumbria’s Animation BA (Hons) and Animation MA programmes are also benefitting from Ellie’s experience, as she explains: “My directing work informs my research and teaching and having academic staff who have real world experience is of huge benefit to the students.

“Having links within the animation industry means I can support students looking for placements and also provide advice when it comes to interviews and employment after University.”

The UK premiere of the film took place at the BFI London Film Festival in October last year and has since been shown at Glasgow Film Festival, Borderlines Film Festival in Hereford, Foyle Film festival in Northern Ireland and most recently had its North American debut at the Full Frame Festival in North Carolina. It was awarded Best Feature Documentary at the Scottish Mental Health Arts Festival.

Following a number of screenings in London, the film will be touring the UK over the coming weeks, with screenings at the Tyneside Cinema in Newcastle on 4 May, the Midlands Art Centre in Birmingham on 16 May and the Square Chapel Arts Centre in Halifax on 25 June.

To find out more about Irene’s Ghost visit http://irenesghost.com/ or https://www.facebook.com/irenesghost/

Find out more about Ellie Land’s other work at www.ellieland.com and about Northumbria’s Department of Arts at https://www.northumbria.ac.uk/about-us/academic-departments/arts/

View the trailer for Irene's Ghost below: 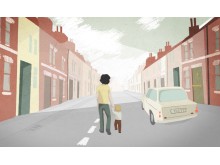 Animation still from the ...