Kara has spent the last year based at Northumbria University, which along with the BALTIC Centre for Contemporary Art jointly hosts the annual Woon Prize.

Her exhibition, Sentient Home Devices, opens at Northumbria’s Gallery North with a special preview tonight, and will then remain on show until 4 October.

Speaking about her work, Kara said: “Sentient Home Devices is a series of physical and digital sculptures, reimagining the legend of Tsukumogami in a contemporary setting.

“In Japanese folklore, Tsukumogami is the collective term for once inanimate household objects that gain sentience after 100 years of service. The objects sprout limbs, faces and personalities, their temperament determined by how well the object was treated in the years leading up to it's transformation.

Established in 2012, the Woon Foundation Painting & Sculpture Prize is one of the most generous art prizes in the UK.

As well as a £20,000 year-long fellowship, each year the winner is provided with studio space at Northumbria University, mentoring from staff at both Northumbria and BALTIC, and a final exhibition of their work.

The prize was established by Northumbria University alumnus Wee Teng Woon, who along with his three brothers set up the Woon Brothers Foundation, which funds the prize each year.

Other previous winners include Ramona Zoladek in 2014, Kayt Hughes in 2015, Becca Halliwell-Sutton in 2016, Kara Chin in 2018 and the 2019 winner and current Woon Tai Jee Fellow Chika Annen. 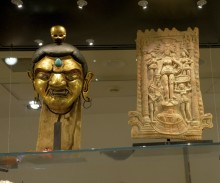