The legal and illegal trade of both wildlife specimens and products between Mexico and the European Union will be explored using evidence from an investigation by the British Academy Newton Advanced Fellowship.

The research, which measured the impact of wildlife trafficking on humans, animals and the environment, was led by

She said: “Legal and illegal wildlife trade is contributing not only to the extinction of species and environmental degradation, but also to instability, violence and unhealthy physical environments for human communities.

“During our investigation we combined studies on conservation and green criminology as well as data on trade between Mexico and the EU and 40 interviews conducted with people involved in the wildlife trade, which gave us a really thorough insight into this issue.”

During the event Dr Quiroz and Dr Wyatt will present the findings of their investigation. They will be joined by Patricia Puente Guerrero, of the Spanish Society of Criminology, who will present a case study looking at trade between Mexico and Spain.

The event will start with a general overview of wildlife trade and trafficking before exploring the background of wildlife in Mexico and the EU, including biodiversity, use and consumption. The legal trade between the two will then be discussed before considering illegal trafficking. The event will close with a drinks reception.

The Legal and Illegal Wildlife Trade between Mexico and the EU event takes place from 1pm to 6pm on Friday 24 February at Northumbria’s Business and Law School, City Campus East. For more information and to register please email nu.events@northumbria.ac.uk or complete the online registration form.

Dr Tanya Wyatt joined Northumbria in 2010. She previously worked as a deputy sheriff and police officer in America before serving as a United States Peace Corps volunteer in Ukraine, during which time she wrote grants and designed programs to prevent the trafficking of women. She is an Associate Professor in criminology with a specific interest in green and environmental criminology. 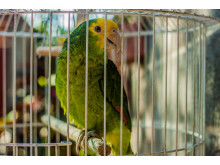