During his first official UK visit outside of the capital, Ambassador Matthew W. Barzun saw first-hand the innovative collaborations between Northumbria’s Design School and the business community, and met with students from the University’s new American Studies programme.

Students and academics presented examples of Northumbria’s design projects, including a collaboration with Durham-based medical device manufacturer, Polyphotonix. Aimed at saving the NHS up to one billion pounds, the project demonstrates Northumbria’s approach to multi-disciplinary innovation, combining expertise from design, manufacturing technology and cutting-edge medical research.

Northumbria’s commitment to multi-disciplinary working has seen the development of programmes including a business support scheme which has worked with over 50 companies and several local authority councils to stimulate strategic business improvements. It has also played a key role in the University’s ambitious plan for Innovation Northumbria @ NDC based at the Northern Design Centre in Gateshead.

Dr Stuart English, Programme Leader for MA Design at Northumbria and a specialist in design-led innovation said: “Northumbria’s innovative design programmes have a proven track record in helping businesses develop, exploit and protect their knowhow. We can offer a range of specialist expertise to help discover new business opportunities and increase profits.

“Our multidisciplinary innovation methods combine design theories in a practical way to support organisations in developing their products and services in order to meet and exceed customer needs and expectations.”

Ambassador Barzun was nominated by President Barack Obama to be the US Ambassador to the United Kingdom of Great Britain and Northern Ireland last year. He is an internet pioneer at CNET Networks where he launched Download.Com, which grew to become CNET’s biggest site. He also led the project to build one of the first comparison shopping sites on the internet, Shopper.Com. The Ambassador has served on the boards of many non-profit organisations with a focus on education.

During a question and answer session with staff and students, Ambassador Barzun, expressed his interest in the innovations taking place at Northumbria University. He said: “I love visiting places that are outside of the capital city because often really good things are happening there.”

While on campus, Ambassador Barzun delivered a presentation to Northumbria staff, students and executive members. He also met with the first cohort of students on Northumbria University’s new American Studies programme, led by Professor Brian Ward.

The visit is a coup for the programme, which was launched last year and is the country’s newest American Studies programme.

Professor Ward, who initiated the visit following talks with the US Embassy last year, said: “Northumbria has launched the biggest initiative in American Studies in the UK for more than a generation. With staff covering a wide range of disciplines, including American film, history, literature and politics, the programme boasts world-class research-led teaching.

“A visit from the new Ambassador of the United States to the UK is a great start in our programme’s inaugural year. And, of course, it is a marvellous opportunity for our undergraduate and graduate students who have a keen interest in the politics, history and culture of the country.

“This visit is the first step in what we hope to be a longstanding relationship between the University and the US Embassy.”

For more information on American Studies at Northumbria, visit www.northumbria.ac.uk/americanstudies 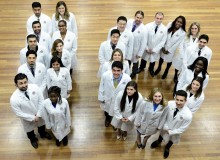