A dozen of the UK’s most promising artists have been shortlisted for the prestigious Woon Foundation Art and Sculpture Prize – with the host venue for this year announced as BALTIC39.

This year’s competition, co-hosted by Northumbria University, Newcastle, will take place on 2 July with the winners receiving a total of £40,000 in prizes.

The prize, sponsored by Northumbria Law alumnus and keen art collector, Mr Wee Teng Woon, was launched in 2012. It is open to students in their final year of undergraduate study of fine art, painting and sculpture across the UK. The inaugural winner was artist Holly Hendry who completed her Fellowship in September 2014. The current Fellow is Ramona Zoladek who holds the Fellowship until September 2015.

Since its launch, the competition has attracted some of the most talented emerging artists in the country, studying at some of the UK’s most prestigious art establishments.

Each year, the Woon Foundation Art and Sculpture Prize judging panel comprises high-profile industry professionals who are internationally recognised artists and experts in their respective fields. The panel is facilitated by world-leading academics from Northumbria University such as Turner Prize-nominated artist and BALTIC Professor Christine Borland.

The Woon Art Prize was created by Mr Woon and is sponsored by The Woon Foundation. It is open to arts graduates from across the UK and comprises a first prize bursary of £20,000, with additional prizes of £9,000 and £6,000. The winner will have access to dedicated space in the BxNU Institute for Contemporary Art at BALTIC39 for the duration of the Fellowship as they work toward a solo exhibition and publication. They will also receive critical and professional development support from a mentor. BxNU at BALTIC39 is the result of a collaborative partnership between BALTIC Centre for Contemporary Art and Northumbria University, which has been in place for several years.

Godfrey Worsdale, BALTIC Director, said: “We are delighted to be hosting the Woon Prize at BALTIC39. Now in its third year, it has already established itself as an important prize for those making the transition from art student to a career as a practising artist. Working in partnership with Northumbria University, the prize enables BALTIC to deepen its commitment to emerging practice.

Prof Christine Borland said: “Northumbria University is thrilled to be co-hosting the Woon Prize exhibition for the first time with our partners at BALTIC.

“Considering the painting and sculpture by 12 recent graduates in the beautiful, top lit galleries at BALTIC39 will be a new pleasure for myself and the other three judges, although the startling generosity and impact of this prize makes it a nerve wracking and privileged task.” 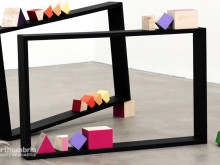