Research carried out by academics at Northumbria University, Newcastle could lead to improvements in treating patients with diseases caused by mutations in genes, such as cancer, cystic fibrosis and potentially up to 6,000 other inherited conditions.

By using virus genomics (genetic material), big data analysis and coding, the experts have devised a technique for predicting how patients are likely to respond to treatments that directly target mutated genes, without even coming into contact with the patient. The method has direct application on DNA-based drugs* currently on the market, 32 drugs in clinical trials, as well as future therapies such as genome editing.

The researchers achieved this by using a culture of human liver cancer cells that contain a non-infectious version of the Hep C virus, and drugs that treat Hep C by cutting and destroying its genome. As the Hep C virus is not good at copying its genome, it creates tens of billions of variants of itself in these cells: this is similar to the genetic variation which could be found in the wider population. The experts then tested the drugs on the cultures, and examined the impact of each of these drugs on each individual variant of Hep C, to determine which drugs work on which variants, and to what extent.

Although these types of drugs are generally highly effective, they are expensive and do not work on all patients. The findings could now lead to more targeted and personalised treatment for patients using these types of drugs, so that they can be prescribed safely, and with greater confidence that they will work.

The technique could also have a significant impact on drug development as companies and doctors could know in advance which patients to select for clinical trials, with greater confidence that the drugs will work. This means clinical trials will be more likely to be successful, bringing new drugs faster to patients. Similarly, after new drugs are approved, doctors will be able to carry out a simple test, to prescribe them safely and with confidence that they will work.

Dr Sterghios A. Moschos, Associate Professor of Cellular and Molecular Sciences at Northumbria University, led the research. He said: “This is a real breakthrough in bringing these types of gene therapies faster to patients, making them at the same time safer and more effective. At the moment there is no way of knowing which drug will work on which patient, other than essentially trial and error, and time. Not only is this costly and risky for the drugs companies, and those paying for the drug, it can also be a lengthy process for patients, with a risk of the treatment not working.

“The next steps are to look at how the technique can be used as a single predictive test for research and clinical use, enabling us to predict which patients might respond to certain types of gene therapies, and by how much, whether they are experimental or approved.

“It may also have a significant role to play in the future for a new type of gene therapy called gene editing; clinical trials on gene editing are about to start in the US to cut out diseased genes from patients and replace them with healthy one.”

Within the article his team* explores how to predict the extent to which a substantial proportion of emerging gene therapies might be effective on any potential patient, whatever the patients’ mutations might be on the gene relevant to the disease.

* Among the DNA-based drugs Kynamro, Spinraza, Exondys51, and Vitravene approved for use in USA and Europe, most cost over £100,000.

For more information about research at Northumbria University, visit www.northumbria.ac.uk/research

Northumbria is one of the largest universities in the UK with almost 34,000 students from 132 countries.

Northumbria is ranked top 50 in the UK for research power and had the 4th largest increase in quality research funding (REF 2014). According to Times Higher Education, Northumbria had the biggest rise in research power of any university in the UK.

A leading Finnish expert in the field of applied sciences has spent a week working closely with Northumbria University academics on an EU-funded project to improve patient safety. 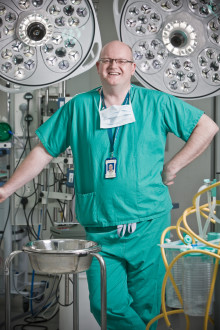 Breakthrough in rapid, mass screening for the Ebola virus

A new, faster and safer way of diagnosing the Ebola virus has been developed by an academic from Northumbria University, Newcastle. Research led and carried out by Dr Sterghios Moschos at Northumbria means that patients with Ebola-like symptoms can be identified and treated much sooner and at the point of care, helping to reduce the spread of the disease and risks to others.