Research has shown that many more people are at risk of homelessness today than at the time of the last general election in 2010, and that the numbers of people falling victim to homelessness are rising. These trends are particularly concerning in light of recent changes to housing and welfare policies and potential plans for further cuts to public spending.

NEHTT, of which Northumbria University, Newcastle is a founding member, is asking candidates for the general election to sign up to its charter to support specific actions being put in place by the next elected government.

Many of the pledges laid out in the charter are deeply rooted in research about homelessness undertaken by member organisations, individually and collectively.

They are:
• Appropriate housing with adequate support services will be provided for vulnerable people across the North East, making access to a settled home and the provision of sufficient social housing a priority.

Adele Irving, Research Fellow at Northumbria University and one of the founding members of NEHTT said: “We believe that it is vitally important that policymakers not only recognise and take action to address homelessness, but actively campaign and work towards achieving long-term change in the law around homelessness. The charter is a series of pledges which we hope candidates elected on 7 May will support in the next parliament.

“The pledges are based on the knowledge we have, from a wide range of research evidence, about what would make a real difference to address the key issues encountered by many homeless people, and in particular about homelessness amongst single people and under-25s.”

As at the beginning of April 2015, signatories include four Labour candidates and six Green candidates. Further support has also come from two Labour front bench MPs, and two Conservative candidates have expressed support for tackling homelessness.

Alex Cunningham, Labour MP for Stockton North, in supporting the Charter, said: “I will continue the work to increase housing provision for young people, particularly the most vulnerable, and campaign with them for safer solutions including ending once and for all bed and breakfast arrangements for them.”

Alison Whalley, Green Party candidate for Newcastle North, said: “I am very concerned too that since 2010 the homelessness and housing crisis has got much worse and the austerity measures and so called welfare reforms have had a grossly disproportionate effect on the most vulnerable in our communities.”

Helen Goodman, Labour MP for Bishop Auckland, pledged support of the Labour Party, saying that “Labour is committed to tackling homelessness and the housing crisis…and it is a priority for me.”

Andrew Gray, Green candidate for Newcastle East, added: “The fast rise in homelessness (coupled with increasingly insecure housing for many more people) has been a shock.”

COMMENT: Who are the homeless and how do we count them? 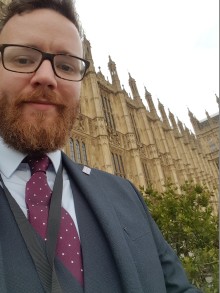 ​A History graduate is using his internship in the House of Commons to help raise awareness of Crohn’s Disease and Ulcerative Colitis.