Researchers from Northumbria University in the UK and the Swiss Federal Institute of Technology, ETH Zurich, in Switzerland have studied debris-covered glaciers that feature the spectacular phenomenon of ice cliffs in Nepal. These glaciers form part of the High Mountain Asia debris-covered glaciers which seem to experience anomalously high losses of mass.

Unlike the white ice glaciers of the Arctic and Antarctic regions, glaciers in many mountain ranges are covered in debris of rock from surrounding slopes. This debris layer can alter the way that the glacier responds to the climate. A thick layer of debris insulates the underlying ice and so decreases its melting rate, while a thin layer of a few centimetres offers less insulation cover, meaning the glaciers experience increased absorption of solar radiation, which therefore increases their melt rate.

Given that most glaciers have debris above a few centimetres, this should insulate the underlying ice and reduce glacier mass losses. However, debris-covered glaciers in High Mountain Asia seem to be losing mass at similar rates as clean ice glaciers in the same regions, prompting an intense current debate around a so-called “debris-cover anomaly”.

For reasons not yet understood, some spectacular steep walls of ice – known as ice cliffs – form on the debris-covered glaciers of High Mountain Asia. Scientists do not yet know how they form, evolve and die.

Recent pioneering studies have shown that these ice cliffs act as ‘hot spots’ for melt as they transfer atmospheric energy into the glaciers. This increases the rate at which the glaciers melt by more than 10 times compared to the surrounding debris-covered ice.

The studies also observed that most or all of the ice cliffs in the region are north-facing, but had not been able to explain why. Northumbria and ETH researchers have now proven for the first time that ice cliffs survive for longer or shorter periods dependent on the aspect – or direction – they face.

Using remote sensing observations and a novel mass balance model to analyse glaciers in the Langtang Valley region of Nepal, the researchers found that once formed, south-facing cliffs die very soon – well within the duration of a summer melt season – so that only north-facing cliffs are relevant for the glaciers’ mass balance and its long-term melt.

Their analysis found that north-facing ice cliffs melt at high rates but maintain a consistent geometrical slope as they recede parallel to the glacier surface. However, those facing south melt much faster at their uppermost sections than at their bottom. This means that the upper section of the cliff recedes at a much higher rate than the base, leading to a slope which is continually reburied by debris.

The findings are particularly significant as High Mountain Asia is the world’s largest reservoir of glaciers outside of the North and South Poles. In contrast to the Poles, the rivers flowing from its mountains provide water to some of the most populated countries in the world. Changes to glaciers in the region could have significant impact on water flow from the mountains and have a huge effect on hundreds of millions of people in Tibet, Nepal, Bhutan, China, Pakistan and India – almost one-third of the world’s population – who depend on the water supply.

She explained: “Until now, no studies had been able to explain the absence of south-facing ice cliffs on debris-covered glaciers. In a warming climate, glaciers will melt faster and lose mass, and the amount of debris is predicted to increase. It is therefore crucial that we better understand how ice cliffs forming on the surface of debris-covered glaciers affect the mass balance of glaciers and their response to a changing climate.

“This will help us to predict their future evolution, which is especially important when some of the world’s poorest countries are dependent on water from High Mountain Asia’s glaciers, which provide a steady supply of water especially during droughts. Any change to the ways and rates in which its glaciers melt is of high relevance for hundreds of millions of people.”

The full findings can be reviewed in the paper, Aspect controls the survival of ice cliffs on debris-covered glaciers, which is now available on the PNAS website.

Dr Pellicciotti’s work falls under the University’s multidisciplinary research into Extreme Environments, which brings together groups of academics who are working to understand the impact of environmental change on the Earth’s surface, subsurface, oceans and atmosphere, as well as within the solar system.

She has recently received two high-profile grants to study High Mountain Asia glaciers. In December she was awarded a prestigious five-year Consolidator Grant worth €2 million from the European Research Council to further her research into the rapid mass losses of High Mountain Asia debris-covered glaciers, and in January she received a £110,000 research fellowship from The Royal Society to undertake a three-year study to research how a warming global climate is impacting on glaciers in the Tibetan Plateau area of High Mountain Asia.

PNAS is the official scientific journal of the National Academy of Sciences. Established over 100 years ago, it is one of the world’s most cited and comprehensive scientific journals, publishing only the highest quality research. 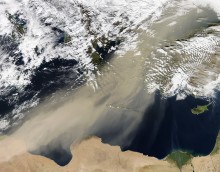 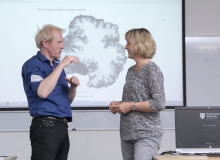