Graduating Performing Arts students from Northumbria honoured the victims of the Oklahoma City bombings last night. A group of 19 students performed the UK premiere of In the Middle of the West, a new play written and directed by Steve Gilroy, Northumbria’s Director of Performing Arts.

In the Middle of the West was written to mark the 20th anniversary of the Oklahoma City Bombing – the worst domestic terrorist attack in US history.

Two further shows of the play are scheduled today, Thursday, 19 May and tomorrow, 20 May at the Northern Stage. Mark Parker, Dean at Oklahoma City University School of Theatre, and Associate Dean Brian Parsons will attend the last performance on Friday, 20 May 2016.

Award-winning playwright Steve Gilroy was originally commissioned the play by Oklahoma City University (OCU) given his notable reputation and wealth of experience on verbatim theatre – a form of documentary theatre based on personal interviews and transcripts. As part of the creative process, he conducted interviews with family members of victims, survivors, local officials and first responders of the 1995 attack. These interview recordings as well as the portraits of different characters involved in the bombing were then developed as an integral part of the play.

In the Middle of the West was first performed in the US by OCU students in April 2015 as part of OCU’s anniversary project to remember the bombing of the Alfred P. Murrah Federal Building. It has since been adapted to reflect the current US political environment, with a special focus on the presidential elections and the Mid-West.

Steve Gilroy, Director of Performing Arts at Northumbria University, said: “The Oklahoma City Bombing may seem a distant event, however, there are still lessons that can be learnt from such a terrible tragedy. Some people I interviewed during the creative process last year expressed concerns that the current atmosphere and political climate in the US is such that a domestic attack of this kind might be imaginable again. Some of the extreme rhetoric that has characterised the presidential nomination campaigns makes the play feel particularly relevant right now.”

Mark Parker and Brian Parsons, Dean and Associate Dean respectively at Oklahoma City University School of Theatre, said: “We are delighted that Northumbria University’s performing arts department is producing the European premiere of the verbatim play OCU commissioned in 2015 to commemorate the 20th anniversary of the Oklahoma City bombing. The stories of the victims, survivors, first responders and those others affected by that fateful and tragic event, are given voice in Steve Gilroy’s beautiful and, at times, harrowing play. We are honoured to have the opportunity to visit the city of Newcastle to see young British actors tell the stories of those we hold so dear in our community”.

Steve Gilroy’s previous works include the award-winning Motherland, which toured the UK in 2009 and shares the stories of women whose everyday lives were touched by the conflicts in Iraq and Afghanistan. He also wrote The Prize, in collaboration with senior lecturer at Northumbria University, Richard Stockwell, portraying true stories of Olympic successes to coincide with the Olympic games in London 2012.

As part of Northumbria University performance shows, a second group of 18 students from its BA(Hons) Performance course will perform the play Mother Courage and Her Children by Bertolt Brecht on Thursday, 19 May at the Northern Stage theatre. This contemporary adaptation, translated by Lee Hall, tells the story of Mother Courage, as she haggles and barters across the battlefields of Europe losing her two sons and one daughter along the way. Mother Courage is played by nine actress, who explore different interpretations of the eponymous lead bringing to life a new imagining of this complex and fascinating play.

Additional pictures and videos of the performance In The Middle of the West are available on request.

For further information about In the Middle of the West and for tickets to attend the performances today, Thursday, 19 May and tomorrow, 20 May at the Northern Stage, please visit https://www.northumbria.ac.uk/about-us/news-events/northumbria-university-degree-shows/performing-arts-showcase-at-northern-stage-middle-of-the-west/

For further information about Mother Courage and Her Children and for tickets to attend the performances at the Northern Stage, please visit https://www.northumbria.ac.uk/about-us/news-events/northumbria-university-degree-shows/performing-arts-showcase-at-northern-stage-mother-courage/ 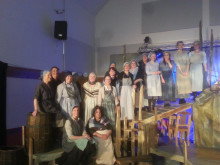