A PhD student has won ‘Best film by an AHRC-funded doctoral student since 1998’ at the Arts and Humanities Research Council’s Research in Film awards.

Jacqueline Donachie was praised by judges for her short film Hazel, which is part of her PhD research at Northumbria University, Newcastle, and is based around a series of interviews with two sisters, one of who has the inherited genetic neuromuscular disorder Myotonic Dystrophy, and one who does not.

The film explores the sisters’ attitudes to the ongoing effects of the disease and focuses not only on their physical and emotional wellbeing, but also takes a wider look at the effects of ageing. Myotonic Dystrophy is an inherited disease that affects the muscles and other body systems. It is characterised by progressive muscle wasting and weakness.

Hazel is also a personal reflection of Jacqueline’s own experience, with her sister, and many others in her family, who are affected by the condition.

“I am delighted to have won this award from the AHRC”, said Jacqueline. “It means a lot to have this research recognised by such an experienced panel of judges.”

The AHRC awards attracted nearly 200 entries across five different film categories and mark the AHRC’s 10thanniversary. The event was attended by film critics, industry experts and senior academics. Jacqueline has received a prize of £2000 towards investments in her future filmmaking activities.

“I look forward to developing the film further for exhibition next year” added Jacqueline.

Mark Chapman, Graduate Tutor in Media Production and part-time PhD student at Northumbria, was also nominated in the awards for his film, CAMREX, under the ‘Award for innovation in film – Best film in the last year’ category. The 15-minute film was part of his practice-based PhD project exploring documentary film. It is a multi-platform project set in a hostel, which examined the lives of its residents – many of who had very complex needs.

For more information about the AHRC visit www.ahrc.ac.uk
To find out more about studying Media and Arts at Northumbria University visit https://www.northumbria.ac.uk/about-us/academic-departments/arts/

Bethan Williams, 21, a Fine Art graduate from Northumbria University, has been revealed as the winner of the Gillian Dickinson North East Young Sculptor Award (GDNEYS) 2019. 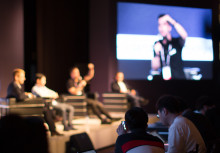