Held at Ponds Forge International Sports Centre in Sheffield, the three-day event kicked off the start of the swimming season for universities across the country, with students of all abilities having the opportunity to take part in the contest.

In his first event of last weekend’s competition, Taka clinched gold in the S4 200m Freestyle. Continuing his successful run of form throughout the contest, the Tokyo 2020 hopeful went on to win gold in the S4 50m Freestyle and S4 100m Freestyle, the race that saw him become the fastest man in the world for this race and category.

Claire Cashmore, who is studying for a Masters in Leadership and Management and is current ITU World Champion for Para Triathlon, took home three gold medals.

BA Leadership and Management student and ten times Paralympic medallist, Phelipe Rodrigues, won two silvers and a bronze, adding to their team total of 82 points for the competition overall.

Head of Aquatics at Northumbria, Louise Graham, said: “Our para swimmers were very impressive in Sheffield once again. Taka was dominant in the Men’s Freestyle events and having just missed out on 2 world records on Saturday, he was very determined to break the record on Sunday. It’s a wonderful start to his Tokyo Paralympics campaign and he will no doubt use it as a platform for his success in Japan next year.

“We will be supporting all of our Paralympic representatives throughout this season to ensure they are able to achieve the best possible academic results alongside their sporting endeavours.”

Find out more about Sport Management courses at Northumbria. 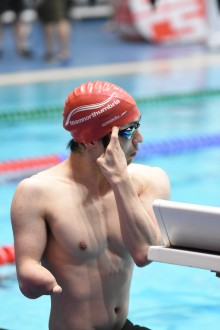 Northumbria Paralympian Taka Suzuki has been shortlisted for the national British Universities and Colleges Sport (BUCS) Sportsman of the Year Award.