Northumbria University, Newcastle, has joined other organisations across the North of England in a unique way to highlight the fight against modern slavery.

March 26 marked the second anniversary of the passage of the Modern Slavery Act through Parliament, the first national legislation since Wilberforce’s two Acts from the nineteenth century.

In the days leading up to the anniversary, many organisations across Northern England have been planting one or more modern slavery roses, a beautiful floribunda peach-coloured tea rose, to commemorate the plight of the thousands of people still in forms of slavery across the UK.

The rose is a spinoff from the Modern Slavery Garden which was developed by a group of professional horticulturalists with technical advice from Gary Craig, Professor Emeritus of Social Justice at the Wilberforce Institute for the study of Slavery and Emancipation, of the University of Hull.

Lucy Winskell OBE DL, Pro Vice-Chancellor (Employability & Partnerships) at Northumbria said: “We are proud to show our support for the rose planting campaign and for the University to help drive such an important debate. It is vital that we are all aware that in today’s global society slave and forced labour are still issues that need to be eradicated and the Modern Slavery Act is a step in the right direction.

“If you ask anyone in the street about slavery, they might talk about Wilberforce and the Transatlantic Slave Trade. In fact, slavery never went away, through both the sale of goods and services on our high streets sourced from people working in slavery in other countries but also directly in the form of people working in forced labour conditions in our fields and factories.

“Closely aligned with this, a strong field of research at Northumbria is centred on responsible business, with our academics in Newcastle Business School contributing new knowledge and understanding into corporate behaviour and ethical practice.”

The rose planting campaign is being led by Professor Craig together with the Anti-Trafficking Student Group of the University of York Students Union and, to date, has drawn in anti-slavery groups and departments in universities in Newcastle, Hull, Manchester, York, Leeds, and York St John.

Other organisations involved include Hull College of Art and design, where students are working on anti-slavery projects, the police, women’s institutes, gardening clubs, public health organisations, local authority parks and gardens, local authorities (with the Lord Mayor of Hull planting six in the city of Wilberforce) and organisations supporting refugees.

For images of the rose go to www.dickson-roses.co.uk

For the modern slavery garden go to www.modernslaverygarden.com

Professor Craig said: “Planting a rose, an everyday event for gardeners, is one simple way to communicate the existence of modern slavery to a very wide public in the UK and shows that there are many different ways in which members of the public can campaign against this heinous crime.” 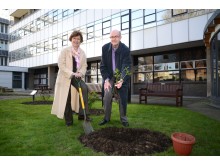 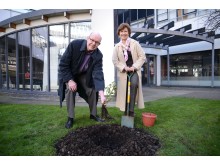