Sanctuary highlights the Irish legal ban which made it a criminal offence for two people with intellectual disabilities (referred to as learning disabilities in the UK) to have a sexual relationship with each other unless they were married.

Directed by Len Collin, Senior Lecturer in Screenwriting, Film and TV Production at Northumbria University, Newcastle, the film supported a repeal of the law. It has led to new legislation which considers the capacity someone has to consent to a sexual relationship, rather than just outlawing such relationships because they have a disability.

Sanctuary tells the story of a group of intellectually disabled people who take a day trip to the cinema with their support worker. Among them are Larry (Kieran Coppinger) and Sophie (Charlene Kelly), who long to be together and so sneak away from their friends to spend time alone in a hotel room.

The film has won critical acclaim across the world, being named Best First Film at the 28th Galway Film Fleadh, with Len Collin winning the title of Best Director at the 2017 Newport Beach Film Festival. In addition, the cast, many of whom have learning disabilities, won the Michael Dwyer Discovery Award at the Audi Dublin International Film Festival.

Len, said: “It’s not often you get the chance to work on a film that actually changes people’s lives. The film deals with the issue of inequality and the actors involved were all very aware of the legal situation. It was something they all felt passionately about and so seeing the impact the film has had and the change in the law which has resulted has been fantastic for everyone involved. I don’t think I’ll ever work on a film again that will teach me as much as I’ve learnt from working with those fine actors.”

Written by Christian O’Reilly, Sanctuary was originally performed as a play by the Blue Teapot Theatre Company in 2012. The film was directed by Len Collin and produced by Edwina Forkin. It was made by production company Zanzibar Films and will be distributed in the UK by Guerilla Films.

Working on Sanctuary has contributed towards the research for Len’s PhD, in which he explores the Representation of Intellectual Disability in scripted Film and Television Outputs.

He said: “This is an area of film I feel very strongly about and the experience of working on Sanctuary has shown the impact that film and television can have when it comes to instigating change. The experience will be very beneficial when it comes to my research at Northumbria University and is something I will certainly be sharing with my students.”

Sanctuary is now due to be screened at Camerimage, the International Film Festival of the Art of Cinematography, which takes place in Poland, as well as the Oska Bright Festival in Brighton, both held in November. It’s UK theatrical run will be in December.

Northumbria’s Film and TV Production BA (Hons) programme is taught by lecturers who are also current filmmakers and screenwriters, such as Len. This gives students a real insight into the industry and presents opportunities to get involved in real-life projects.

To find out more about Northumbria’s Film and Television programmes, please click here, or come along to one of our Open Days. 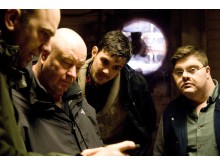