An interactive ‘sound trail’ has been installed at six locations along the river – from Kielder Water in Northumberland to the Ouseburn in Newcastle – giving the public a glimpse into not only the fluctuating fortunes of the Tyne over the past several centuries, but also the role of anglers in these developments.

At each spot, visitors can access interviews and archival recordings inspired by the Tyne’s transformation, from a polluted dumping ground for industrial waste in the 1950s, to the best salmon river in England today.

The project – Fishing for Answers - Angling and the River Tyne – was conceived by Oliver Moss (Senior Research Fellow, Department of Social Sciences) and Tom Mordue(Professor, Newcastle Business School), both of Northumbria University, Newcastle. It has been supported by the Environment Agency, Northumbrian Water, the North East Film Archive and Cardiff and Newcastle Universities.

Information boards with QR codes have been placed along the Tyne, at Kielder Salmon Centre, Hexham, Wylam, Bywell, Dunston Staithes and the Ouseburn. By scanning the codes on their smartphones, visitors can listen to audio clips, detailing more about each location.

The recordings also explore the role anglers play in the river’s history and future, featuring clips from the 1964 Tyne Tees Television documentary A Kind of Heaven, which explores the environmental, economic, and social issues associated with angling.

Oliver said: “Over the last 60 years the River Tyne has acquired the status of a world class salmon river. But the path towards this has not always been straightforward.

“The aim of this project was to explore the transformation of the Tyne, both from the point of view of the official agencies involved in its protection and safeguarding, and from that of the anglers – who are increasingly seen as these agencies’ ‘eyes and ears’ on the riverbank.

“We hope the sound trail will provide members of the public with an insight into the river, its history and its inhabitants, especially at this crucial time of year when the salmon have returned to spawn and interest in their journey is high.”

Tom added: ‘The Tyne is a fabulous river with a real story to tell. Its clean-up has been a wonderful success, and now salmon and sea trout have returned in force, it is unsurpassed in England as a game river. Its clean waters flow through beautiful countryside and a great city. It really is a treasure, which we are very proud to celebrate through this project.”

Among the interviewees included in the sound trail is the Environment Agency’s Jon Shelley, Fishery Programme Manager for the North East. He said: “The story of the River Tyne and its salmon is quite remarkable. Salmon were almost wiped out from the Tyne by the 1950’s, but by reducing pollution, building fish passes and restoring river habitat, and supported by the fabulous work rearing salmon at Kielder Salmon Centre, we can be proud that, working together, we have once again made the Tyne the best salmon river in England”.

The project has been part-funded by the Economic and Social Research Council (ESRC) and was launched as part of the ESRC’s annual Festival of Social Science, a unique, week-long celebration of the social sciences. Find out more by visiting the Fishing for Answers website.

Fishing for Answers on the River Tyne from Northumbria University on Vimeo.

This is the second sound trail Oliver Moss has created – two years ago he worked with fellow Northumbria academic Adele Irving to create an interactive project exploring homelessness in Newcastle.

COMMENT: Who are the homeless and how do we count them? 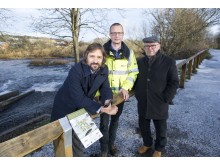