Russian cosmonaut Gennady Padalka, the commander of the current crew on board the International Space Station, has broken the record for the longest time spent in space with 803 days. Padalka, who is to return to Earth in September, has previously said he would like to try for 1,000 days on a future mission.

However, space travel significantly alters our bodies. While we don’t know exactly what the cumulative effect of several long journeys to space is, Padalka is at risk developing a range of health problems – including back problems, osteoporosis (brittle bones), cancer and damage to the nervous system.

Living on the Earth’s surface, gravity constantly pulls our bodies downwards, keeping us firmly on the ground. Our muscles have to contract continuously to stand up against this gravitational pull or to lift objects. It causes us to getslightly shorter during waking hours. Gravity also pulls our blood down into our legs and our hearts have to work hard to pump oxygen-rich blood to our brains.

But our bodies are adapted to these conditions. In space, the lack of gravity has profound effects on the human body – and these effects are amplified the longer we stay in the low-gravity environment in space (known asmicrogravity). While in microgravity, astronauts will typically see their muscles waste away, their bones lose mineral density and their blood reduce in volume. In space, our muscles waste away simply because they are not used. Reductions in muscle size have been reported after as little as two weeks of exposure to microgravity during space shuttle missions – and significant reductions are experienced after long duration missions of around 6 months to ISS.

The muscles in our legs and torso are the most affected since they are not used as much on the ISS as they are on Earth. Astronauts don’t need to walk or stand upright against gravity. The muscular changes experienced as a result of space flight are very similar to those seen as our bodies age.

This damage occurs despite the fact that astronauts take part in up to two hours of exercise on the ISS each day, leading to significant issues once back on Earth. As a result, astronauts typically have to undergo a rigorous rehabilitation programme to help them stand up straight again.

Travelling to space also affects astronauts’ skeletons significantly. As gravity is not pulling them downwards, their spines lengthen up to as much as a few inches over the course of a long-duration mission to the ISS. This increase in the length of the spine is due to an increased volume of fluid in the spinal discs – fluid which is normally squeezed out over the course of the day when we are on Earth. This effect, combined with the changes to muscle control, makes the spine less stable – leading to lower-back pain both during and after space flight. In fact, astronauts are at much greater risk of a slipped discwithin the first year after they return from space.

On Earth, every time we take a step or land after a jump, our bones – especially in our legs – are loaded as a result of gravity. This helps our bones maintain an appropriate density of minerals (including calcium). Since astronauts’ bones are not loaded in this way in space, bone mineral density reduces. The exception to this is the bones of the upper body (the arms, for instance) which are used more in space and can show a slight increase in bone mineral density.

This loss of bone density leads to the bones becoming brittle, similar to people on Earth who develop osteoporosis. Research has predicted that only 50% of the loss in bone density will be restored after 9 months back on Earth.

Another problem that occurs with a lack of gravity is that the heart does not need to work as hard to pump blood to the brain. Astronauts’ bodies adapt to this by reducing the volume of blood in the body. The effects are not noticed while in space. However, when returning to Earth, astronauts’ blood is suddenly pulled back down towards their feet which leads to the brain not receiving enough oxygen-rich blood. This can lead to dizziness and astronauts are often seen to faint.

In general, astronauts’ bodies age at an accelerated rate in space, therefore causing significant challenges upon return to Earth. Padalka, who has been on a number of space missions since 1998, will no doubt have experienced many changes to his body. Every time he returned to Earth, his body will have recovered to some extent following a period of intense rehabilitation, but not everything will have returned to normal. The muscles that support the spine, however, are known not to recover well, even after six months of recovery after a period of disuse.

In addition to facing osteoporosis and back pain, Padalka will also be at greater risk of developing cancers and damaging his central nervous system as a result of prolonged exposure to radiation in space.

Northumbria University has announced the winner of its ‘Inspirational Spaces’ photography competition. 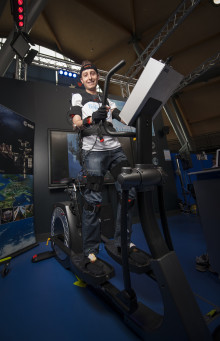